Hudson Yards, the largest private real estate development in the history of the country, lies just north of West Chelsea from Tenth Avenue to the Hudson River and West 30th to West 34th Streets. A remarkable engineering feat, it is built on top of rail yards where the LIRR parks its trains that leave out of Penn Station.

Phase I of the project  encompasses 3 Class-A office towers, 2 residential towers, a high end mall and culture shed as part of the Eastern Yards. All of these buildings were built at the same time, which is also another engineering feat. Within only 4-5 years, the Related Group created an entirely new neighborhood over the rail tracks.

For those looking for true luxury apartments for sale Hudson Yards has two buildings to choose from - 15 Hudson Yards and 35 Hudson Yards New York Apartments (we go into each in further detail after the set of listings).

The remaining three commercial towers have attracted some of the best companies in America. It is incredible that all of these companies have signed up to come to Hudson Yards: Blackrock, KKR, JP Morgan, Coach, Loreal, SAP, Milbank Tweed, BCG, Silverlake, Point72, Boise Schiller, Debevoise, Cognizant, DNB, CNN, HBO, Wells Fargo, Warner Brothers, Lyft, & Peloton to name a few.

Tech giants like Apple, Amazon, and Facebook are also taking lots of office space either in Hudson Yards itself or adjacent to the project.  We expect Manhattan’s far west side may become a mini tech hub as Google already has some offices there as well in addition to its Chelsea and West Soho footprint.

In NYC, techies can rub shoulders with those actually in different industries.   It’s no wonder then, that the tech focus in NYC is a bit different than that of Silicon Valley. While California has long had a computational and hardware focus, New York tech is more focused on applying that new technology to industries such as media, advertising, publishing, commerce, marketing services, fashion, financial services, and retailing.

As more and more companies move into the area over the next couple of years, the demand for Hudson Yards condos will significantly increase. Many executives, bankers, lawyers, and tech workers at these companies will end up living in either Hudson Yards or West Chelsea, the new residential luxury enclave due south. Even Hell’s Kitchen is seeing new development, but in the mid-market segment. 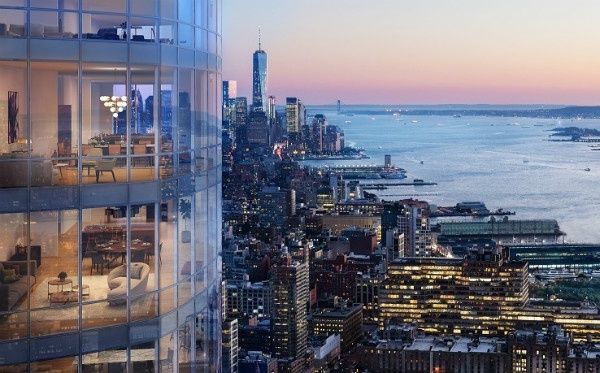 Project: Fifteen Hudson Yards was designed by Diller Scofidio + Renfro in collaboration with Rockwell Group. This 89-story glass tower features an elegant silhouette, formed by four graceful arcs of glass at the top of the tower. The views south are protected and stunning, with open views overlooking a low rise West Chelsea. 15 Hudson Yards is located along the High Line and is adjacent to The Shed, a huge cultural event space.

Over 40,000 sq. ft. of amenities with one amenity above all others.  There is an out of this world rooftop terrace at 15 Hudson Yards called the Skytop which is shielded from the wind with 60’ of glass screen wall.

This is 900 feet above New York City. Adjacent to the Skytop is a lounge, private catering kitchen and dining room, a rare offering. In addition there are two floors of amenities on the 50th and 51st floors.

15 Hudson Yards is truly a 5-star building and given its physical position, this building may have the best views in the whole project.

Amenities: 75-foot pool, a whirlpool, and a private spa with treatment rooms; a fitness center, co-working space; a beauty bar; and wine storage along with a dining room and tasting room. 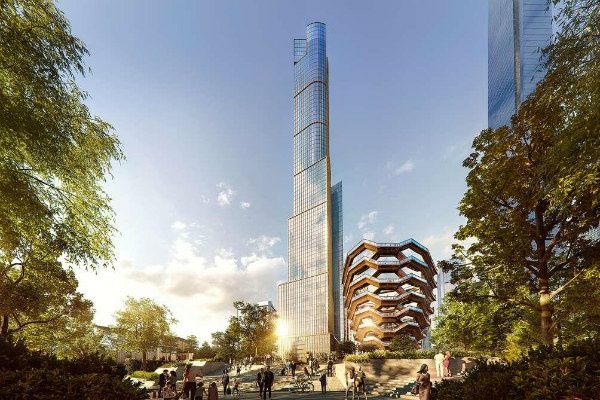 Project: Thirty-Five Hudson Yards was designed by David Childs of SOM with interiors designed by AD100 designer Tony Ingrao. This limestone tower rises 92 stories and offers great views of the city and the Hudson River.

Starting on the 50th floor, the condo residences are sleek with floor-to-ceiling windows that have great views. The vibe at 35 Hudson Yards is that of a 5-star hotel. The materials are so rich and tasteful, unlike a lot of other NYC apartment buildings that deliver cookie cutter apartments with bland finishes. Not at 35 Hudson Yards!

Unique to the building, 35 Hudson Yards is home to the flagship Equinox Hotel, Club and Spa, a 150-room, five-star hotel with a ballroom. In addition, there is a flagship Equinox Fitness Club with indoor and outdoor swimming pools, SoulCycle, and Equinox Spa.

Pricing here is a bit higher than the homes for sale at its sister building, 15 Hudson Yards. One feels like they are at the Four Seasons Hotel or Mandarin Oriental. The richness of the materials in not only the interiors, but also the common areas really stand out.

Hudson Yards itself consists of two areas.  The Eastern Yards have been fully built.  The Western Yards will likely come up in the next 10 years, but unlike the Eastern Yards which was all built at the same time, the buildings in the Wester Yards  will come in one by one over time.

Phase I of Hudson Yard occupies the area from West 30th Street to West 33rd Street between 10th and 11th Avenues. The Hudson Yards project features some great architecture, as noted below:

10 Hudson Yards, the first office tower to open in May 2016, is 52-stories tall. It was designed by Hudson Yards Master Plan architecture firm Kohn Pedersen Fox and is home to Coach, L’Oreal, VaynerMedia, and SAP

15 Hudson Yards, the first residential tower to open at the end of 2018, is 71 stories tall and was designed by Diller Scofidio + Renfro, with interiors by David Rockwell and Ismael Levya architects.

30 Hudson Yards,  the tallest office in the project, this 92-story office tower houses Time Warner, CNN and HBO corporate offices. The building was designed by Kohn Pederson Fox and occupancy is expected by the end of 2019.  At the top of 30 Hudson Yards is the Edge, the highest outdoor observation deck in the western hemisphere.  The Peak restaurant can be found on the 101st floor of 30 Hudson Yards.

50 Hudson Yards, a 58-story tower, which will house BlackRock, was designed by Foster + Partners.

55 Hudson Yards was designed by  Kohn Pedersen Fox and Kevin Roche John Dinkeloo and Associates. To-date it has attracted a plethora of financial firms and hedge funds such as Point72 Asset Management that manages the assets of Steve Cohen, Third Point headed by Daniel Loeb, and Stonepeak Infrastructure Partners. In addition, law firms Cooley and Boies Schiller are future tenants.

The Shops at Hudson Yards was designed by Kohn Pedersen Fox and is a 7-story luxury destination with a combination of global icons, independent boutiques and an array of restaurants.  Brands include: Cartier, Patek Philippe, Stuart Weitzman, Van Cleef & Arpels, Zara and H&M, among others. In addition, Thomas Keller will curate the restaurant collection at Hudson Yards and will feature some of the best dining in the world. Costas Spiliadis (Estiatorio Milos), Michael Lomonaco, David Chang and Jose Andres all have restaurants here.

The Shed is a six-story telescopic building designed by Diller Scofidio + Renfro and Rockwell Group. The building will be a visual arts and performing arts center on the south side of Hudson Yards. Scheduled for completion in 2019, it is expected to be home to several high profile events, including New York Fashion Week.

The Vessel, a $200 million sculpture at the center of Hudson Yards Phase I, what has been likened to NYC’s Eiffel Tower, was designed by British designer Thomas Heatherwick, who is also designing two luxury condo towers straddling the high line at 515 West 18th Street in Chelsea.

7-Train, A special subway station was created for Hudson Yards at 34th and 11th. This is an extension of the 7 subway.   In addition to the 7-train, the 34th and 8th Avenue station is close.

The Hudson Yard project in NYC continues to attract some of the best architects in the world, with the recent addition of Frank Gehry and Santiago Calatrava who, according to the Wall Street Journal, have been tapped to develop buildings of Phase II of the project. Phase II of Hudson Yard will occupy the area from West 30th Street to West 33rd Street between 11th Avenue and the West Side Highway in New York NY.

Phase II will consist of residential towers, an office complex and a school serving students from K-8th grades. Phase II won’t be completed for some time, as the city has yet to grant approval to build over the  train tracks.

Hudson Yards (neighborhood), Manhattan is going to be the most exciting place in the city, once it is fully built. That might take some time though, but we are enjoying what has already been delivered right now!